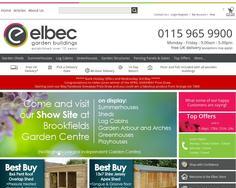 2.7
Terrible
from 0 to 10
3 reviews on Trustmeter
Review company

Outragious behavior DO NOT USE!!
I recently bought a shed with Elbec. Seemed like a good price, which was reason enough for me to buy. Then I received an email to say if I had any special instructions for delivery, please get in contact. All seemed so efficient and well run. (Or so I thought) I found it difficult to find their number to call them so replied via the same email. My details about delivering at the rear of the property were taken with thanks. Again, all so good. Due to Covid, delivery would be at least six weeks. I was shocked but waited. My delivery day was coming. I sat in all day and while I made a quick cuppa, I saw I had three missed calls all at once from the driver. He didn’t get an answer and so drove off. I contacted the company who said they would not ask the driver to turn around as he was too busy and I hadn’t answered the call. I explained I was just making a cuppa but they were not at all understanding and reiterated that it was all down to the drivers discretion. I said, so the driver is the boss? He knew I was on his list and must have made time for the drop, so why couldn’t he return as it was just a few minutes since his call. They said they would cancel my order as I obviously had issues. I said, I’m allowed to question what has happened but they put the phone down and that was that. I immediately phoned the company direct to ask who this person was and why they would cancel my order. That is not the way to do business. I had to wait for six weeks and then all day just to have my order cancelled. The manager said she would send me an email next week with a date for the delivery but if I was going to question it any further, maybe I should cancel. I couldn’t cancel even if I wanted. I had a team coming to erect the shed. The council also had a deadline for me to erect it. I waited until after the weekend and contacted them again to ask why I hadn’t had the email they promised. They then said it would be delivered the next day. I told them I was out from 11am to 12.30pm as I had no idea this would happen. They told me it would be delivered with or without my presence. Then why didn’t he do that on Friday? It’s all down to the driver who is king in this loop. They then informed me that it would be delivered at the kerbside at the front of the building. I said this is not to my instructions. They explained that it is standard policy and that I could cancel my order if I didn’t like it. I was over a barrel and they knew it. They enjoyed making me squirm and left me guessing for the next 24 hours what would happen. I even phoned the driver while he was on his way and he said he couldn’t understand my instructions of delivering to the rear and wasn’t interested in hearing me explain how easy it in fact was. I was left not knowing anything at all. When I returned, it was delivered where I had explained. I was relived. But the torture I went through was so unnecessary and cruel. Once you’ve made payment, they are so unsympathetic to anything you suggest. They had power over my fete and they reveled in that power to make me squirm as much as they possibly could. You could say, alls well that ends well but the weeks I suffered chasing them and not knowing the outcome was outrageous and the way I was spoken to and dealt with was like nothing I had ever experienced. I paid hundreds of pounds for this treatment to. If I had known, I would never have used them at all. I’d rather of paid a few extra pounds and received the care I needed from a different supplier. The time frames given were also ridiculous. Waiting six weeks after I paid was not right at all. I sent an email to outline all that had happened as I was about to initiate legal proceedings but each reply asked that I submit to their policy or they wouldn’t deliver at all the next day. I’ve never known such terrible behavior come from any business. Let alone one that has charged such a fortune, taken the money and then couldn’t care what treatment you receive from that point on. Oh and the driver had more power than anyone else and he was a nasty bit of work too.
9th Aug 2020

Poor customer service, poor products
Shed leaking badly in first year, lots of contents ruined., Windows have split away from main shed frame, and wood splitting badly in several places despite built and treated as per the instructions. Elbec not prepared to do anything about it, despite a 10 year guarantee and claiming weatherproof on their website they advised "we are not advising the shed is waterproof". They offered £20 to buy some wood filler but I'm having to replace the whole roof and refit the Windows. Shocking company shocking product.
3rd Apr 2017

Poor quality
Staff were lovely. Results were poor.
Are you business owner?

Is Elbec Garden Buildings your company?

Elbec is a leading online retailer of garden buildings and fencing supplies. From sheds to summerhouses, playhouses to log cabins, Elbec offers quality products at low prices and free friendly advice from our UK-based staff.