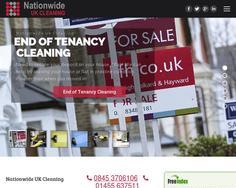 6.0
Average
from 0 to 10
2 reviews on Trustmeter
Review company

Avoid
Shameful display of how not to run a cleaning business. Paid upfront (alarm bells should have rung) for end of tenancy clean. To be fair they did the carpets adequately, but their "floor to ceiling clean" left everything else to be desired. The crew didn't seem able to see what needed cleaning, and where they had actually done something ie wiped the kitchen cupboard fronts they had stopped when they couldn't reach higher than 6ft. Also unable to follow simple instructions like "post the keys through the letterbox when finished if I cant get back at lunch" - instead they left the keys with a neighbour who works nights. To be honest I would have probably done a better job by not hiring these "professionals" Their back office function is also lamentable, having raised the problem with the clean with them, Jon, an affable but essentially less than useful person advised to send pictures to a number on whatsapp. (Alarm bells again...) I sent through 44 (that's FORTY FOUR) pictures evidencing the awful quality of their efforts. And it took considerable time to get any response. But not from the number they were sent to, I had to chase and chase Jon the Affable to get any commitment to a refund. And it took the mention of going via chargeback with my card issue before action was hinted at. So I was offered a 50% refund. But like I said the carpets were adequate so thought I'd split the difference. This was agreed and promised on 12th March'20 to be paid by Finance on the run of the 13th. Nothing happened on the 13th. Jon the Affable escalated and sent a memo for me on the monday......Nothing. So I ended up chasing Jon many times and being for want of a better word, fobbed off, because he could only do so much with Finance. Eventually promised payment on Friday 20th. Nothing happened on Friday 20th. So I called Jon again monday 23rd, told he would chase Finance. Nothing happened. Finally got through to a guy today who actually did something, not as affable as Jon the Affable but it's the results that count. I got my refund. And I learned my lesson. So the moral of the story....? Go somewhere else.
8th May 2017

Excellent oven clean
Natalia & Marcin came to clean my very dirty oven and wow I was amazed. They did a fantastic job, my oven looks like new. They were also very polite and even washed up their coffee cups. I would definitely recommend this company. The communication is good and I will be using them again in the future.
Are you business owner?

Is Nationwide UK Cleaning your company?